A Legacy of Women Rowing 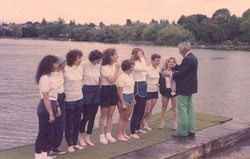 Women rowers of yesteryear!
Members of today's Conibear Rowing Club are a direct line in the lineage of northwest masters rowing, which experienced a boom from 1982-1984 when Dick Erickson, University of Washington Husky head rowing coach, simply took a bet over drinks at the yacht club bar.
Using his spouse and her friends and then many many more women, Erickson demonstrated that older women with no prior rowing experience could, in fact, become competitive rowers. He taught 6-week classes each spring to more than 150 women from four Seattle-area yacht Clubs. Some went on to row exhibition races down the Montlake Cut during Seattle's festive Opening Day regattas.

After the 1984 races, it occurred to Erickson that it might be interesting to take a coxswain and the stroke pairs from each of the yacht club boats and train them intensively. He was curious to see if they could do more that simply survive the course.  Continued below... 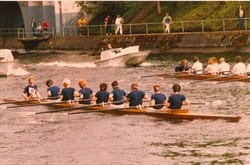 Before 1984, organized Masters' rowing in the Northwest consisted primarily of Lake Washington Rowing Club and Portland Rowing Club, both groups largely made up of former collegiate rowers. Erickson's group of a dozen handpicked women, who were not affiliated with any formal rowing club, were widely known as "Dick's Chicks." It was a name the group was given by parking lot attendants at the UW -- and one that lives on in the emblem included in the detail of Randy Pratt's first CRC logo design. Erickson's composite boat surprised everyone during its first races, finishing close behind the more experienced rowing clubs and occasionally winning on age-corrected times!

The Conibear name comes from these twelve rowers, a larger group evolved, organized briefly as WIC (Women's Interclub Crew). After dropping the former yacht club orientation, it became Conibear Rowing Club in 1986.  Two of those first dozen rowers continue as active competitors.  Traditional CRC colors, Navy and Yellow, echo UW Husky crew colors, and the very name Conibear honors the memory of the Hiram Conibear Shellhouse on the UW campus, where many of the earliest CRC members learned to row. Since 1986, CRC has been rowing out of the Seattle Parks Department's Mount Baker Rowing and Sailing Center on Lake Washington.  Join us! 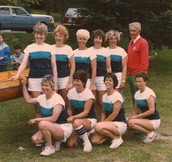 Read the Conibear History Play!
Click here to read the the play dramatizing CRC's illustrious history written by Carol Mast, one of the founding Conibear members.